Did Columbus Rape Anyone? The Michele de Cuneo's Letter 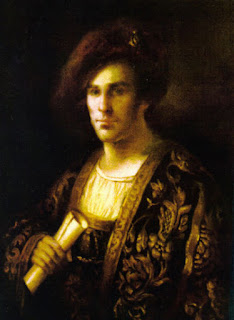 Did Columbus rape anyone or give women away for that purpose? To answer the question I used excerpts from my book Christopher Columbus The Hero, Chapter 30 with some additions, modifications, and edits specifically designed for this article:

According to a letter Cuneo wrote to a friend, he admitted to raping a native girl that was supposedly given to him from Columbus. Revisionists love Michele de Cuneo’s rape story because, in their view, Columbus is guilty by association. This Cuneo’s rape story is in many of Columbus’ biographies out there, as if Cuneo was Columbus himself, or his clone; or as if Columbus knew what his friend did and approved or applauded the assault!

Columbus wasn’t in the bedroom with his friend to know what he did. The reason why we know today Cuneo’s rape story is because he wrote about it in a personal letter that became public centuries later in 1885. This is assuming the letter is authentic in its entirety, since some scholars challenged it in the past due to “inconsistencies in style.” [1] Today it is accepted as genuine because it passed the test of paleography in the 19th-century. The original letter doesn’t exist and what we have today is a copy made around 1511. Of course, that doesn’t mean it’s a fake, but it doesn’t mean it’s all true either. The fact is since Columbus became famous many forged letters, or authentic ones containing false information, have come to surface.

So let's look at some of the inconsistencies and falsehoods in Cuneo’s letter:

He started the letter with, “In the name of Jesus and of His Glorious Mother Mary,” but a few pages later he rapes a native girl. Cuneo seems to contradict himself as well when he said, “While I was in the boat I captured a very beautiful Carib woman, whom the said Lord Admiral gave to me.” Which is true? That Cuneo “captured” her, or that the Lord Admiral “gave” her to him?

Cuneo claimed he took the Carib girl he raped to his cabin, where she screamed at the top of her lungs after he beat her for initially denying him intercourse. [2] If that is so, how come no one else heard the screaming? Can you imagine the enemies of Columbus if they have heard a native woman screaming because Columbus gave her away to be raped? Columbus’ enemies would have a field day with such an accusation!

Another falsehood by Cuneo is the existence of temples in the Caribbean, when there were none.

There were also two respectable persons who were in the same second voyage when the alleged rape happened. One was a doctor named Doctor Diego Álvarez Chanca, and the other was Guillermo Coma of Aragon. Neither Dr. Chanca, Guillermo de Coma, and I would add Ferdinand Columbus, Peter Martyr, Las Casas, Herrera, or any other credible source ever mentioned that Columbus was raping or giving women away to be raped. [3]

Cuneo also said that when the native girl yielded to him, “she seemed to have been brought up in a school of harlots.” That means Cuneo knew what such a “school” would be like. So here we are taking the words of a cheater, a gossip and a rapist as “gospel.”

During this second voyage, Columbus kept the Spaniards from native women. Strangely enough, those who hated Columbus, accused him of everything, except giving women away to be raped. In fact, one of the complaints against Columbus and his brothers by Roldán and his rebels (during the third voyage) was that they “made them observe the three monastic vows;” that is poverty, chastity, and obedience. [4]

“Debauchees” means “a person addicted to excessive indulgence in sensual pleasures; one given to debauchery.” The word “profligate” means “utterly and shamelessly immoral or dissipated; thoroughly dissolute.” “Ravisher” means “rapist.” [5]

It is ironic how revisionists highlighted, and magnified Michele de Cuneo’s rape story, but avoided the parts in the very same letter where he confirmed that the Caribs depopulated islands with raids, slavery, rapes, murder, and cannibalism. Cuneo also tells us that, in the meantime, Columbus was rescuing the Taínos from being kidnapped and raped by the Caribs. This is what he wrote:

“In that island we took twelve very beautiful and very fat women from 15 to 16 years old, together with two boys of the same age. These had the genital organ cut to the belly; and this we thought had been done in order to prevent them from meddling with their wives or maybe to fatten them up and later eat them… there were three or four Carib men with two Carib women and two Indian slaves, of whom (that is the way the Caribs treat their other neighbors in those other islands), they had recently cut the genital organ to the belly, so that they were still sore.” [6]

Where is the outrage against these kidnappings and castrations? Guillermo de Coma, who was on the same voyage as Cuneo, confirmed the rape raids by the Caribs in a letter:

“They hand over the female captives as slaves to their womenfolk, or make use of them to satisfy their lust. Children borne by the captured women are eaten like the captives.” [7]

Any outrage against this? Why is that some websites are so willing to stain Columbus’ reputation with innuendos, by using selected portions of Cuneo’s letter, but skip the parts where Cuneo reported the natives were doing the same things revisionists pretend they lament?

In addition, Cuneo's description of the natives was not positive either. He said the natives ate poisonous beasts, insects, reptiles, dogs, snakes, lizards, spiders, etc. According to him, the natives would cut their own father’s head off and then cook it, as told by their idols, if the father was sick with no hope to recuperate. The first woman to enter their temple would have sex with their “holy man.” They would have sex anywhere openly, with anyone, except with brothers and sisters; they were sodomites; they were cold-blooded people; they would live short lives, etc. [8]

Should we take that as “gospel” too? In fact, the description of the natives above is another reason why I’ve been skeptical with Cuneo’s account. Whereas every primary source made distinction from Caribs and Taínos, Cuneo painted them all with the same broad brush.

Samuel Eliot Morison, who translated Cuneo’s letter into English says Cuneo was not like Columbus or the “solem Spaniards who wrote on the early voyages.” Morison admitted Cuneo’s narrative is “somewhat confused.”

Anyone reading Columbus’ accounts can clearly see that Columbus was very protective toward the native women. It is also clear that the rapists in Cuneo’s account, by his own admission, were him and the Caribs, and not Columbus.

I’m not saying Cuneo’s account is a hoax, but I would not be surprised if the future reveals it to be one. I’m just saying there are a lot of problems with his side of the story and his account is unreliable.

1. Journals and Other Documents on the Life and Voyages of Christopher Columbus by Morison, p. 209.

6. Journals and Other Documents on the Life and Voyages of Christopher Columbus by Morison, pp. 211-212.

Email ThisBlogThis!Share to TwitterShare to FacebookShare to Pinterest
Labels: Debate