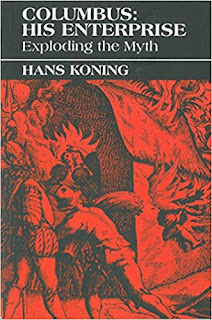 “Columbus: His Enterprise, Exploding the Myth” by Hans Koning, is the book Hollywood, apparently, is planning to adapt for an upcoming Columbus movie. If that is the case, don’t expect anything positive about Columbus in it. As for the book: it is pure garbage. The book is make things up. It repeats the same revisionist script (no pun intended) of Columbus being this evil man, who was an idiot, who did not know anything, a genocidal maniac, a destroyer of worlds, etc. You know the drill.

It would take a full book to debunk all the lies in this one, but fortunately, my first book (“Christopher Columbus The Hero-Defending Columbus from Modern Day Revisionism”) already addressed those distortions, since his book is a repetition of the same false talking points as other hysterical revisionists.

As I will point out, Koning’s book is full of inaccuracies, speculations, innuendos, race baiting, etc. Here are a few of examples:

In chapter 2 the author claimed: “Many theories have been suggested: Columbus was a Jew, looking for the lost tribes of Israel, Columbus sailed because he had been in Iceland learning about the voyages of the Vikings; and so forth. These ideas are either unproven or downright silly…”
He is wrong, because those “downright silly” arguments have been proven false by documentation and by serious scholars like Paolo Emilio Taviani.

“Columbus did not go to school in Genoa...He learned to read and write much later and was self-taught. Indeed, it would have been most unusual for a weaver’s son to go to any formal school unless he was destined for the priesthood.”
That is incorrect. Though Columbus was mostly self-taught, the primary historical sources confirmed his parents sent him to school as a kid, to learn how to read and write.
“The notion that Columbus himself then wrote to Toscanelli” (an scholar who was his contemporary) “is probably” (more speculation) “a fantasy...”
Incorrect again. Las Casas confirmed the same story as Columbus’ son, and Las Casas even owned a chart Toscanelli sent to Columbus. Source: Columbus’ Journal translated by John Cummins, Tuesday, 25 September, 1492, page 89. Notes page 213.

Every time the author mentioned something Columbus succeeded in doing, he attributed it to luck.

In chapter 3 Koning claimed that Columbus blamed a local chief for the Santa Maria caravel shipwreck:  “... he” (Columbus) “now tried to convince the Indian chieftain that it was his fault that the ship, on its way to the alleged gold fields, had run aground.” That is not true. Just read Columbus journal, entry December 25th, 1492. And I could go on and on.

Koning was very selective how he quoted Columbus’ letters and how he tells the story. He did not mention that war, conquest and slavery was practice by everyone back then, including, the natives.
Koning said: “Perhaps there is a danger of idealizing the life that these Indians;” but that is exactly what he did! Koning quoted Columbus saying the natives “would make fine servants,” which Columbus did not say; and then skipped the line where Columbus described the “peaceful” natives as with “wounds” (scars) “on their bodies” because “people from other adjacent islands came with the intention of seizing them...”

Koning spun the whole struggle of Columbus with Spaniards. He never mentioned that Bobadilla (the guy who put Columbus in prison) was full of it; that he was removed from office, and the accusations against Columbus (which are the ones repeated today by revisionists) were not true.

He gleefully stated that a pro-Columbus scholar, Samuel Eliot Morison, said Columbus indeed committed genocide. Except that is not true. It doesn’t matter if you are for or against Columbus, what matters are the facts, and Morison, nor the revisionists, are above historical facts.

Koning did not mention the Caribs depopulated entire islands long before 1492. Does that counts as genocide? Koning was also glad the New World is named “America” and not “Columbia.” In other words, he was fine with Amerigo Vespucci fighting and selling natives as slaves. It is only Columbus, he doesn’t like.

In chapter 10, Koning suggested (with a question) to change Columbus Day.

The book closed with an additional chapter written by another revisionist, who was trying to convince young students, that Columbus was a bad guy. He, “the teacher,” took away the purse of one of the students to teach them conquest was theft, and that was what Columbus was doing. Of course, he did not mention conquest was universal. I’ve found out that “the teacher” is a socialist, and socialism is a better example of someone stealing your purse. Not only that, but socialists committed genocide in recent history (the Nazis), and their cousins, the communists in Europe, Asia, etc, did the same. This teacher is a Hypocrite.

If we need anything, is most certainly not a movie bashing Columbus, but a movie or a documentary debunking the lies against his honor. Making a movie about Columbus based on Koning’s book is like Hollywood making a movie about Christ or Christianity based on a book written by Richard Dawkins. We’ll keep an eye of where Hollywood ultimately goes with this project.

Posted by official christopher columbus at 11:48 AM