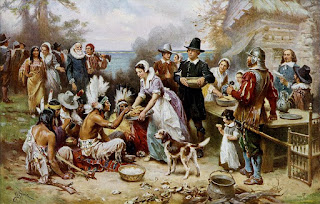 Another thing revisionists are doing is changing the year that Thanksgiving Day happened so it will coincide with an incident were some natives tribes were massacred in a battle in 1637. Men, women, and children of the Pequot Tribe died, and some were sold as slaves. They want us to think that the battle happened for no reason. According to primary historical source Bradford’s History of the Plymouth Settlement, the Pequots were usurpers of other Indian tribes (page 249). They were “a warlike tribe that had conquered many of its” (Indian) “neighbors” (page 280), and they “openly attacked the English in Connecticut… and killed many of them as they were at work in the fields, both men and women…” (page 283). The Pequots conspired with the Narragansetts to “fire” the colonists “houses, kill their cattle, and lie in ambush for them.” Except the Narragansetts were victims of the Pequots too, and decided to join the colonists instead. All that the English and the Narragansetts did was the exact thing Pequots were planning to do to the colonists in the first place. The Pequot were the bullies. They just got punched back in the nose by their intended victims. The colonists praise God for the victory, as the Pequots would have done, if they had been the victors. Bradford’s History of the Plymouth Settlement, pages 286-288.

Winslow said: “Our Corne did proue well, & God be praysed” (praise), “we had a good increafe [sic] of Indian-Corne, and our Barly indifferent good…” Mourt’s Relation or Journal of the Plantation at Plymouth, pages 132-133.

In other words, the Pilgrims were praising God for prosperity, after a hard year of distress. Praising God is a form of thanksgiving. Next Winslow described how they celebrated, which is the part of the story we are all familiar with. In modern English: “Our harvest being gotten in, our governor sent four men on fowling,” (hunting) “that so we might after a special manner rejoice together after we had gathered the fruits of our labor. They four in one day killed as much fowl as, with a little help beside, served the company almost a week. At which time, amongst other recreations, we exercised our arms, many of the Indians coming amongst us, and among the rest their greatest king Massasoit, with some ninety men, whom for three days we entertained and feasted, and they went out and killed five deer, which we brought to the plantation and bestowed on our governor, and upon the captain and others. And although it be not always so plentiful as it was at this time with us, yet by the goodness of God,” (sounds like he is thanking God again!) “we are so far from want that we often wish you partakers of our plenty.”
Mourt’s Relation or Journal of the Plantation at Plymouth.

Turkeys are mentioned in Bradford’s version of the same story: “And beside water foule, ther [sic] was great store of wild Turkies, of which they tooke many…”
Bradford’s History of the Plimouth Plantation, From the Original Manuscript, page 126.

That was the “fake” Thanksgiving. According to some, the “real” Thanksgiving happened after the Lord answered the Pilgrims prayers for rain. They were struggling with a famine, but the Lord saved them, and William Bradford suggested to “set apart a day of thanksgiving.”
Bradford’s History of the Plimouth Plantation, From the Original Manuscript, Pages 170-171 (footnote).

Since that was the first time the word “thanksgiving” was used in the Pilgrim's accounts, that is the reason some claim today is the “real” Thanksgiving. The fact is both were thanksgivings to God for saving them in times of trouble. We could say 1621 was maybe expontaneous, while 1623 was official. But what do they care about it? They want to replace it with UnThanksgiving Day anyway!

People associate the United States with the Pilgrims which is why Americans in no way will buy into removing or replacing Thanksgiving Day. For some reason, they don’t associate America with Columbus. Probably because it is named “America” and not “Columbus.”

To conclude this chapter, Thanksgiving Day is about unity, and in my opinion, is one of the most beautiful times of the year. The celebration is quickly followed by Christmas. Both celebrations are rooted in religion, but you don’t have to be religious to enjoy them. Everyone is welcome. Indians were present celebrating with the Pilgrims. That’s why Thanksgiving is a celebration of unity. Yet, we have some ungrateful people out there trying to divide people and some Grinches trying to steal Christmas. There was even a teacher who put some Satanic displays beside some Christmas decorations not that long ago! What a Grinch! Misery loves company!

You can buy our book here: Amazon

Posted by official christopher columbus at 5:47 AM

Email ThisBlogThis!Share to TwitterShare to FacebookShare to Pinterest
Labels: History