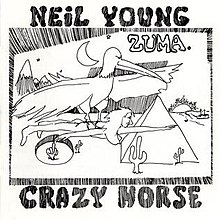 "Cortez The Killer" by Neil Young

"He came dancing across the water/ With his galleons and guns/ Looking for the new world/ In that palace in the sun/ On the shore lay Montezuma/ With his coca leaves and pearls/ In his halls he often wondered/ With the secrets of the worlds/ And his subjects/ gathered 'round him/ Like the leaves around a tree/ In their clothes of many colors/ For the angry gods to see/ And the women all were beautiful/ And the men stood/ straight and strong/ They offered life in sacrifice/ So that others could go on/ Hate was just a legend/ And war was never known/ The people worked together/ And they lifted many stones/ They carried them/ to the flatlands/ And they died along the way/ But they built up/ with their bare hands/ What we still can't do today/ And I know she's living there/ And she loves me to this day/ I still can't remember when/ Or how I lost my way/ He came dancing across the water/ Cortez, Cortez/ What a killer."

"Cortez The Killer" was written by Neil Young from the album "Zuma" in 1975.

The song is not about Columbus, but about Hernán Cortés, who was his contemporary. The lyrics romanticized Montezuma and the Aztecs as if they never knew hate ("hate was a legend"). The reason why Cortés was able to conquer an empire of millions of people with a few Spaniards was precisely that the natives hated Montezuma and decided to join forces with Spain to overthrow him. At least the song made a reference to human sacrifices. Cool song though.

You can find Cortés primary sources on Google books for free, as "Letters of Cortes."
Posted by official christopher columbus at 6:03 PM