Review: "The Life of the Admiral Christopher Columbus by his son Ferdinand" Book 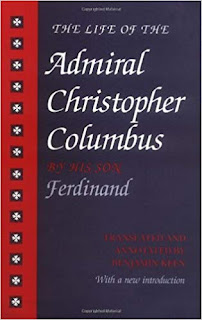 If you are looking for a Columbus biography, this is the book you need to read. It was written by his son Ferdinand Columbus, who was a scholar, historian and a witness since he was with Columbus during his Fourth Vovage. Even those who hate Columbus like the Fourth Vovage and have compared it to the Oddysey by Homer.

Ferdinand not only tells us what Columbus did but why he did it. He defended his father from the slanders of the Spaniards, which sadly, revisionists still use today as anti-Columbus propaganda.
The first time I've read the book, I was like, where is the movie? I mean, there are movies out there, but they are historically incorrect, or they don't cover all the Voyages. The only problem with this edition is the unnecessary, and sometimes obnoxious, Introduction by Benjamin Keen, the English translator. Just skip the Intro.

Columbus story is probably the most epic story I ever read in my life. The book is full of adventure, intrigue, battles, mutiny, shipwrecks, pirates, corsairs, even cannibals.

A 5-star classic. Get it and read it!